Messer, the largest family-run industrial gases specialist worldwide, is again this year’s recipient of the Axia Best Managed Companies Award, the prize and seal of approval for outstandingly managed companies; the honour is presented by Deloitte, the German business magazine WirtschaftsWoche, and the Federation of German Industries (BDI). The company has already been presented with this award in 2016 and 2019. ‘As one of the honourees, Messer is once again showcased for its top-notch corporate governance, with excellent innovation, a strategy based on long-term developments and strong governance structures. This not only makes Messer a benchmark for superbly managed medium-sized enterprises but also a symbol for Germany’s future as a business location’, Lutz Meyer, partner and head of the medium-sized enterprise programme at Deloitte, emphasised.

In light of measures to contain the spread of coronavirus, the award was presented personally on 15 May 2020 at Messer’s headquarters in Bad Soden near Frankfurt, Germany. Stefan Messer, owner and CEO, and Marcel Messer, Adviser to the Management of Messer Group, accepted the prize in person. Stefan Messer emphasised: ‘Since Messer Group GmbH was founded, we have been pursuing long-term objectives in order to lead the company independently and economically into the future. With this in mind, we take a future-oriented and continuous approach that considers the different circumstances in our existing markets.’

Marcel Messer, a fourth-generation shareholder of Messer, is responsible for strategy and corporate culture at Messer. He says: ‘We are committed to sustained profit growth, not short-term profit maximization. Measurable goals in the various business units document our improvements and development.’

Founded by Adolf Messer in Frankfurt, Germany, in 1898, the company employed four workers and one salaried employee for the production of acetylene generators. Today, Messer is the largest family-run industrial gases specialist worldwide. Gases and services are offered in Europe, Asia and the Americas under the brand ‘Messer – Gases for Life’.

‘The current situation around COVID-19 presents enormous challenges for German medium-sized enterprises as well. More than ever these times call for entrepreneurial qualities such as strategic vision, consistent, future-oriented action and a value-driven approach to corporate governance. This is also what our Best Managed Companies stand for’, programme manager Markus Seiz of Deloitte added. 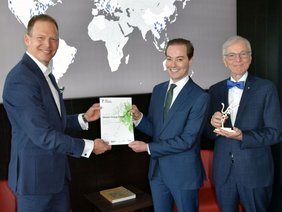