The functions of assist gas during laser cutting are as follows

Compressed Air is a commonly used gas in any industry. So far, air has come across wide range of applications starting from loading and lifting to cleaning and dusting. To emphasize on the part of thermal cutting, still in plasma, compressed air is used in cutting mild steel. Though we have other options like oxygen / nitrogen for laser cutting, there are still customers chose to cut with compressed air. The major reason behind that is as follows

Before we start using the Compressed Air, let us understand the basic properties of the air. Air is matter that is available in earth’s atmosphere. Air is a composition of Nitrogen (78%), Oxygen (21%), Argon (0.9%), Carbon dioxide (0.04%) and other gases (0.06%). This mixture also contains 1% of water vapour.

The air preparation is the preliminary process before using the compressed air. The preparation setup consists of following items.

Using compressed air in the laser cutting process has a mixture of reactive and fusion cutting, as the gas contains 78% of nitrogen which is non-reactive and 21% of oxygen which is reactive. Because the portion of inert in air is high it is possible to achieve speeds equal to nitrogen cutting. As well the major portion of remaining gas is oxygen, which is a reactive gas causing more heat in the cutting.

It is one alternative way using assist gas in laser cutting process by which you gain competitive speeds in production and reduce cycle time. Thereby reducing cost of production. However, the speed and quality of cutting depends on the laser power. If the application of air cutting prevails, then it is a good alternative with proper setup. 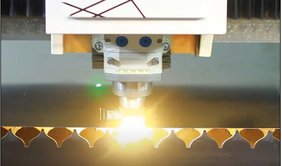