In sport “higher, fast, further” is sufficient motivation to improve performance. In industrial production, too, especially in plate processing, this credo is always current. That this does not always just mean a new machine can be seen in the example of stürmsfs AG from Goldach in Switzerland. They had their plasma cutting system OmniMat® 6500L from Messer Cutting Systems GmbH, bought in 2013, updated and linked to a new CAD/CAM system — which significantly increased productivity at a stroke.

The metal market is fiercely competitive. Only he who can meet the consistent demands with appropriate products and services can make the top league. Located in Goldach, in the middle of the Appenzeller Alps and directly on Lake Constance, stürmsfs AG offers above average competence in all aspects of steel processing. The Swiss company already expanded its machine park with the fast and efficient plasma technology in the shape of an OmniMat® 6500L from Messer Cutting Systems GmbH in Groß-Umstadt. In 2017 for even more flexibility, amongst other measures, they converted to the CAD/CAM software SigmaNEST. So that the plasma system could transfer the improvements with full benefits onto the plate, the Messer technicians executed their own modifications to the equipment and the control.

SATISFACTORY PERFORMANCE WITH CAPACITY TO SPARE

Right from the start, stürmsfs AG were very satisfied with the performance of the OmniMat®. Daniel Welti, Production Manager at stürmsfs AG has this to say, “Once we had introduced plasma technology, we could supply the market better as we could work considerably faster than before. Thus additional operations such as manually adding bevels or drilled holes were saved because the machine combined all these tasks. Thanks to the additional option of bevelling we even acquired new customers.” However, requirements rose with the new options, and the new software also made it necessary to make an in depth overhaul of the existing machine.

For this, the complete production structure which involved the OmniMat® was researched and analyzed. “One of the first steps was to update to the newest machine software. That had an enormous influence on the “Global Control” as man/machine interface as well as on the overall performance of the OmniMat® — and that was no disadvantage for stürmsfs” explained Boris Wiechmann, project manager at Messer Cutting Systems.

The OmniMat® 6500L used there is equipped with two plasma units type Kjellberg HiFocus 360i, two bevel systems Skew Delta and a drilling system. “Working with SigmaNest we have matched the postprocessor, and made a clone, so to speak, of the cutting machine in the software, so that the communication between the two systems can take place directly and without snags” explained Boris Wiechmann.

Messer had already given the stürmsfs personnel intensive training on the new machine’s capabilities when it was first purchased. Now, after the update, it was time to learn about the new drilling process and the updated bevel program. “Training in the Messer Academy paid off then. This time the personnel were trained on site with profound knowledge on all aspects of the optimization” said Daniel Welti.

The improvements to the OmniMat® at stürmsfs AG were profound and effected the entire plate processing. The efficiency of the complete cutting system received an especial boost. Thus non- productive times were reduced and the processing cycle strongly optimised. Daniel Welti on this, “The bevel programmes benefited from the update in that, for example, multiple parts could be marked in parallel in multi-torch operation using both bevel heads, and that with very good results.”

Also the link to SigmaNest made life easier for the programmers and operators. Thus the programming station could decide dynamically which drill process suited the application. In this context, it was also clear that drilling had significantly sped up under the newest software version and runs significantly more efficiently ever since.

On the basis of test runs we had already counted on significant time savings over the older software version of the OmniMat®. To make this transparent and backed by figures we ran reference programmes beforehand under the old version with a cycle time of 24.5 minutes”, stated Boris Wiechmann. At the customer’s request, the reference program was also rewritten for a newly acquired competitor’s plasma machine and ran in 19 minutes. The Messer technicians were in this case not ready to accept the Olympic motto “to compete is everything”. “So we waited tensely to see how our OmniMat® would score with the new release. After only 16.5 minutes the program was ended, thus scoring a 33 percent improvement on the old time, and even outperforming the competition by 2.5 minutes or 13 percent”, rejoiced Boris Wiechmann.

OLD AGE DOES NOT PRECLUDE PERFORMANCE

“The modification and updates have optimised the performance of the entire system significantly and, above all, given the customer a significant added value — and that with a machine which is already five years old” was the summing up from Boris Wiechmann, project manager at Messer Cutting Systems.

Caption: At stürmsfs AG in Goldach, Switzerland it can be seen what updates on tried and tested machines can achieve: a plasma machine OmniMat® 6500L bought in 2013 from Messer Cutting Systems GmbH has a new gloss with its significantly higher productivity. 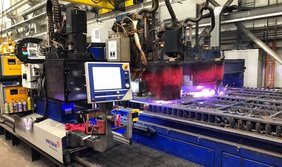