When a flammable mixture of fuel gas and oxygen or air is present in a gas line upstream of a welding or cutting blowpipe, flame can travel backwards in the form of flash back into the gas line, and there is the possibility of a serious accident.

A flashback arrestor is a safety device designed to stop a flame in its tracks. It is therefore used to prevent flashback into cylinders or pipework. click to watch this video - https://www.youtube.com/watch?v=JObaMblT8Bs

A flashback arrestor should not be confused with a non-return valve, which has no particular flame stopping properties. A non-return valve can reduce the probability of a flashback, as it serves to prevent reverse flow of oxygen into fuel lines and fuel into oxygen lines. The flame arrestor usually contains an element which may consist of narrow passages through a sintered component or metal foam.

When a flame enters the element, it is quickly cooled by the surface of the element and the flame is extinguished. The flame arrestor may contain a pressure or temperature actuated cut-off valve, and may then be known as a flashback arrestor.

It is strongly recommended that arrestors with cut-off valves are fitted to the pressure regulator outlet of all acetylene cylinders and acetylene distribution systems. It is highly advisable to fit them to the oxygen outlet, and other fuel gas outlets. They can be fitted to the blowpipe, but this offers no protection from a fire arising from a leaking hose. Click to watch the video - https://www.youtube.com/watch?v=JObaMblT8Bs 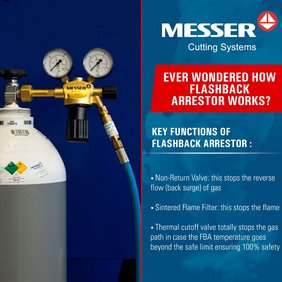