Plasma is considered the fourth state of matter. The three other states are solid, liquid, and gas. Plasma is a cloud of protons, neutrons and electrons where all the electrons have come loose from their respective molecules and atoms, giving the plasma the ability to act as a whole rather than as a bunch of atoms. A plasma is more like a gas than any of the other states of matter because the atoms are not in constant contact with each other, but it behaves differently from a gas. It has what scientists call collective behavior. This means that the plasma can flow like a liquid or it can contain areas that are like clumps of atoms sticking together.

Plasma : The Fourth State of Matter

A plasma is a hot ionized gas consisting of approximately equal numbers of positively charged ions and negatively charged electrons. The characteristics of plasmas are significantly different from those of ordinary neutral gases so that plasmas are considered a distinct "fourth state of matter." For example, because plasmas are made up of electrically charged particles, they are strongly influenced by electric and magnetic fields (see figure) while neutral gases are not. An example of such influence is the trapping of energetic charged particles along geomagnetic field lines to form the Van Allen radiation belts.

In addition to externally imposed fields, such as the Earth's magnetic field or the interplanetary magnetic field, the plasma is acted upon by electric and magnetic fields created within the plasma itself through localized charge concentrations and electric currents that result from the differential motion of the ions and electrons. The forces exerted by these fields on the charged particles that make up the plasma act over long distances and impart to the particles' behavior a coherent, collective quality that neutral gases do not display

And how does it work?

Plasma is defined in Websters as a ”collection of charged particles ... containing about equal numbers of positive ions and electrons and exhibiting some properties of a gas but differing from a gas in being a good conductor of electricity ...”. You can also think of it as an electrically heated gas stream. I like to think of it as a condition where all of the electrons from every atom are flowing from atom-to-atom, instead of just orbiting. Regardless of what’s going on inside a plasma stream, the way to cut metals with it is pretty straightforward. Take that stream of electricity flowing through a gas, and constrict it through a small orifice. Now that stream is really dense and moving very fast. The resulting stream can melt and blow through most metals quite easily. That’s a plasma torch.

Plasma cutting torches usually use a copper nozzle to constrict the gas stream with the arc flowing through it. That arc jumps from an electrode in the torch to something else – usually the conductive material being cut. That’s a ‘transferred arc’. There are some systems that use a ‘non-transferred’ arc where it jumps from the electrode back to the nozzle, but those are not usually used for cutting. So that means that plasma cutting is only used for materials that are conductive, primarily mild steel, stainless steel, and aluminum. But lots of other metals and alloys are conductive too, such as copper, brass, titanium, monel, inconel, cast iron, etc. The problem is that the melting temperature of some of those metals makes them difficult to cut with a good quality edge. 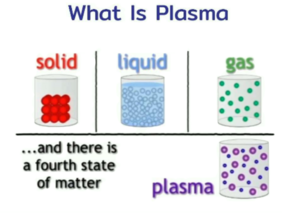 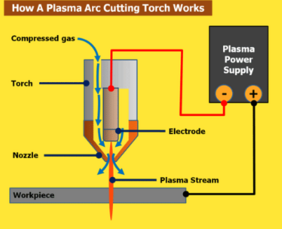