Unlike the OEMs, most customers are probably unaware of the dangers and consequences of using counterfeit consumables. It may also be a challenge for them to identify the counterfeits. Poor equipment performance that is directly due to the counterfeit consumable is mistakenly attributed to the product’s brand instead. In turn, this creates the false impression that the original equipment is unreliable, which negatively impacts the company’s branding, credibility, and reputation.

Here, we highlight five reasons why the use of counterfeit consumables can be more counterproductive than beneficial.

Non-genuine consumables are manufactured only with quick profit in mind. Often times, they are manufactured with techniques that focus primarily on rapid mass production instead of quality. Counterfeit suppliers lack the stringent manufacturing processes found in original products, and they simply replicate the parts used in the most popular manufacturing equipment with no proper quality control and checks. They also tend to use the lowest cost materials that are more prone to wear and tear. As a result, the copies may look the same but they lack the quality and durability that original consumables offer, often resulting in poor cutting capabilities. In most cases, the performance of the counterfeit consumable is inconsistent and unreliable, which significantly increases downtime

Plasma torches are precision devices and the corresponding consumables are manufactured to extremely tight tolerances with critical dimensions. Any deviations from the original measurements will have an impact on the overall cutting performance of the plasma system. While these counterfeit consumables still allow end users to cut metal, there are clear differences or inconsistencies in cut part quality, cutting speed, and consumable life when compared to the originals. Incorrect manufacturing of the consumables may cause internal torch damage or failure.

During cutting, a large amount of energy is required to generate the plasma arc, and temperatures can go up to 25,000 degrees Celsius. To reduce costs, counterfeiters manufacture their consumables with low quality metals. Unlike the originals, the counterfeits may not be able to withstand the high temperatures emitted during plasma cutting, and the torch could possibly overheat as a result. Apart from the choice of materials, consumables that are out of tolerances may also be prone to overheating. Consequently, this might cause the torch or plasma system to malfunction or breakdown, which will significantly increase downtime.

Most OEMs provide post-sales technical support for their products. Unfortunately, troubleshooting may not be possible if unknown parts were used in the lead up to a damaged torch or plasma system. Some manufacturers do not provide warranty for torches if the damage was caused by the use of counterfeit consumables, while some OEMs may even revoke the warranty for the entire system. Companies who choose to purchase counterfeit products will inevitably find themselves at the losing end in such situations

Counterfeit consumables may cost a fraction of the price, but they typically also last only for a fraction of the cutting lifespan when compared to the genuine products. As such, frequent replacement becomes a necessity. Additional post-cutting processes like edge reworking may also be necessary due to the poor and inconsistent cut quality rendered by the cheap copies. Irrevocable damage may also occur from the use of counterfeit consumables, causing impairment to a valuable piece of equipment, which could result in irreplaceable production downtime and loss of business.

Do watch this small video - https://youtu.be/Mmc2Q1mgJq4 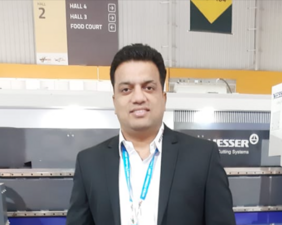