Laser cutting - Laser cutting is mainly a thermal process in which a focused laser beam is used to melt material in a localised area. A co-axial gas jet is used to eject the molten material and create a kerf. A continuous cut is produced by moving the laser beam or workpiece under CNC control. Click here to know more about fiber laser machine - https://in.messer-cutting.com/products/machines/fiberblade-v

Plasma cutting - Plasma cutting is the process by which highly energized molecules can be harnessed to economically cut a variety of alloys in a range of sizes and thickness. This method of manufacturing is often found on factory floors that prepare metal components, such as those made out of aluminum or titanium, but is known for being versatile in potential. Unlike flame cutting, plasma cutting reliably and precisely processes many different materials. Click here to know more about plasma cutting machine - https://in.messer-cutting.com/products/machines/multitherm-pro

Water Jet - This method is mostly favoured for metals that don’t go well with heat. Under this method, a highly concentrated jet of water cuts through the metal to get the desired shape. The water is often mixed with abrasive compounds to ease the process of cutting metals.

Punch - Another much employed method of cutting metals, punch involves the use of extreme pressure to force sharp blades into the metal and cut them. Though it might sound similar to manual cutting of metals, machines are capable of putting much more force than humans and therefore, are able to cut heavier metals at a rapid speed. It’s one of the most productive methods of cutting metals.

Milling - Milling is the most common form of machining, a material removal process, which can create a variety of features on a part by cutting away the unwanted material. The milling process requires a milling machine, workpiece, fixture, and cutter. Milling is typically used to produce parts that are not axially symmetric and have many features, such as holes, slots, pockets, and even three dimensional surface contours.

Sawing -  Sawing is a process wherein a narrow slit is cut into the workpiece by a tool consisting of a series of narrowly spaced teeth, called a saw blade. Sawing is used to separate work parts into two or more pieces, or to cut off an unwanted section of a part.

Shearing - The shearing process is performed on a shear machine, often called a squaring shear or power shear, that can be operated manually (by hand or foot) or by hydraulic, pneumatic, or electric power. A typical shear machine includes a table with support arms to hold the sheet, stops or guides to secure the sheet, upper and lower straight-edge blades, and a gauging device to precisely position the sheet. The sheet is placed between the upper and lower blade, which are then forced together against the sheet, cutting the material.

Drilling - Drilling is a cutting process that uses a drill bit to cut a hole of circular cross-section in solid materials. Instead, the hole is usually made by hammering a drill bit into the hole with quickly repeated short movements. 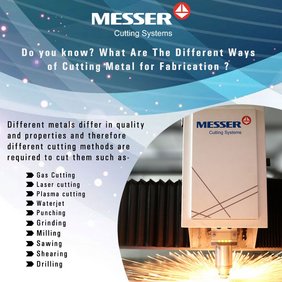